EDITOR'S NOTE: Inflation and our subsequent increased costs of living are not under control; in fact they are far from it. The government would like us to believe they have everything contained; however those of us who purchase food, buy fuel, heat our homes and/or use electricity know differently. The only question at this point is, how much more out of control can it get?

We Won't Be Fooled Again... Inflation Is Most Definitely Not "Under Control" -The Economic Collapse blog 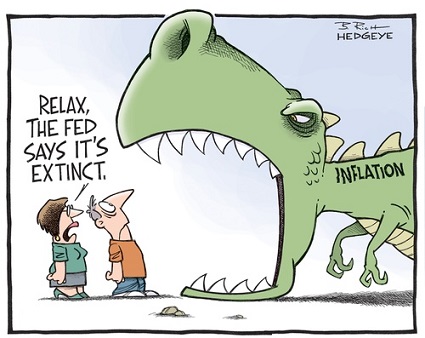 Inflation is going down! Let’s all celebrate! We all knew that when the Federal Reserve began aggressively hiking interest rates it would have an impact on inflation. Higher rates have caused a new housing crash, they have crushed the tech industry, and they have sparked the biggest wave of layoffs that we have seen since the Great Recession. We have entered a significant economic downturn, so it was inevitable that the annual rate of inflation would start to moderate. But as I will explain below, that doesn’t mean that inflation is now “under control”. The real rate of inflation is much higher than we are being told, and people all over the country are being absolutely crushed by the rising cost of living.

Let’s start with the good news first. According to the Labor Department, the annual rate of inflation is rising at the slowest pace since October 2021…

Consumer prices increased 6.5% from a year earlier, down from 7.1% in November and a 40-year high of 9.1% in June, according to the Labor Department’s consumer price index, a measurement of what people pay for goods and services, which labor released on Thursday.

Okay, but Fox Business has just reminded us that the annual rate of inflation “remains about three times higher than the pre-pandemic average”…

So we are still definitely in a high inflation environment.

SPACESHIP MOON!  IS THE MOON AN ALIEN SPACE STATION?