Are Stocks "Headed off a Cliff?"

The stock market has been showing some signs of strength recently, but is it reflective of a healthy market or a confused market? Based on some of the traditional market trackers, it could prove to be a misrepresentation of true condition of the markets.

Authored by Jack Phillips via The Epoch Times

Wall Street's fear gauge has fallen to its lowest level in months, and Wall Street strategists are concerned it could be a warning that the latest stock-market rally is coming to an end.

Specifically, they're worried that the low level of the Cboe Volatility Index, otherwise known as "the VIX," suggests that investors may have become complacent about the risks to their portfolios, raising the possibility that they could be caught off guard in a way that exacerbates the potential market mayhem, according to a series of research notes sent to clients and reviewed by MarketWatch.

Others said they're worried the low VIX will soon revert to its long-term average, bringing the latest market rebound to an end.

The discussion of an impending recession continues. Not the outlook any of us prefers to see, but another reflection of an economy that's been under constant strain for the last few years. Here's what's expected... 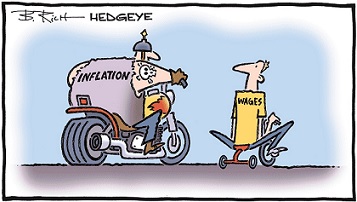 Authored by Jack Phillips via The Epoch Times

Two top economists said that despite contrary predictions, a recession will likely hit the United States in the near future.

"Some economists argue that the strength of the labor market - as well as household balance sheets - will keep the economy strong enough to avoid a recession," wrote Lakshman Achuthan and Anirvan Banerji, the co-founders of the Economic Cycle Research Institute, in a Friday opinion article.

"We disagree," they wrote, saying that "it remains our expectation that the U.S. economy will enter a recession this year."

That's because, in part, because of the Federal Reserve's recent decisions to raise interest rates to their highest levels in decades in a bid to slow inflation levels not seen since the early 1980s, they wrote. The rate hike appears to have worked to an extent as the Labor Department last week confirmed that the consumer price index that measures inflation fell 0.1 percent in December to 6.5 percent.

And, in the process, took a huge step toward dethroning the U.S. dollar as the global reserve currency.

At a time when the US economy has been struggling to find solid ground, it would appear it was just dealt another severe blow. China, Russia & Saudi Arabia have decided to "dethrone" the US dollar as the global reserve currency. This is a move that probably couldn't have come at a worse time.

The last 24 hours have marked another major waypoint along the path to my long-held contention that Russia, China and Saudi Arabia are going to make a massive, collective push to try and dethrone the U.S. dollar as global reserve currency.

Anybody who has read my 23 Stocks To Watch For 2023 (or any of my other recent articles discussing how I am personally positioning myself for this thesis) knows that I believe we are on the precipice of an unprecedented era geopolitically.

Put simply, I believe there is a historic divide in the making between the BRICS nations, led by Russia and China, and the West, led by the United States.

SPACESHIP MOON!  IS THE MOON AN ALIEN SPACE STATION?